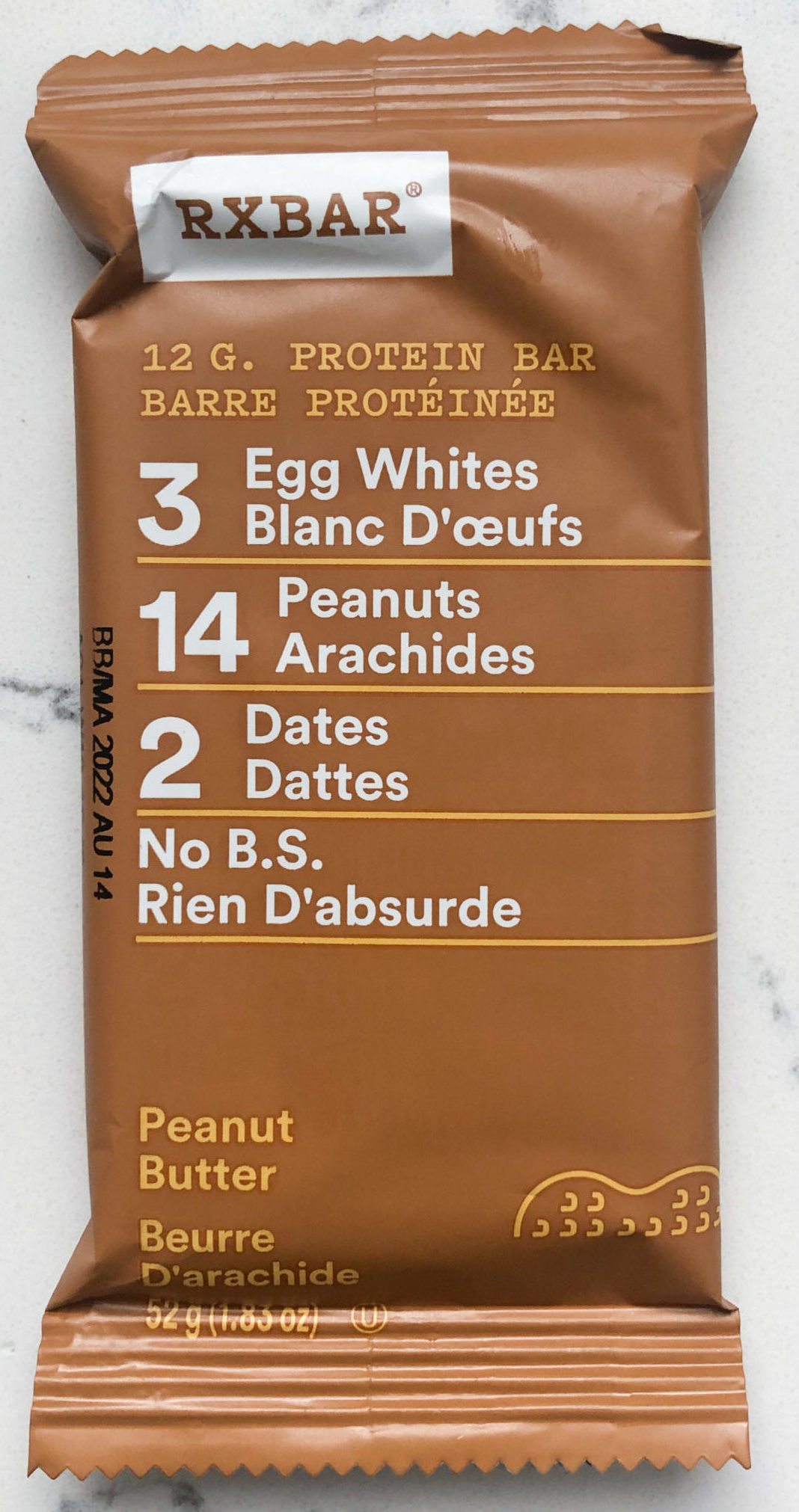 This RXBAR Dietitian Review will help you decide if RXBARS are nutritionally sound and live up to their marketing claims. Read on for our dietitian review of taste, nutritional properties, ingredients, use, cost, and overall versatility before making your decision. 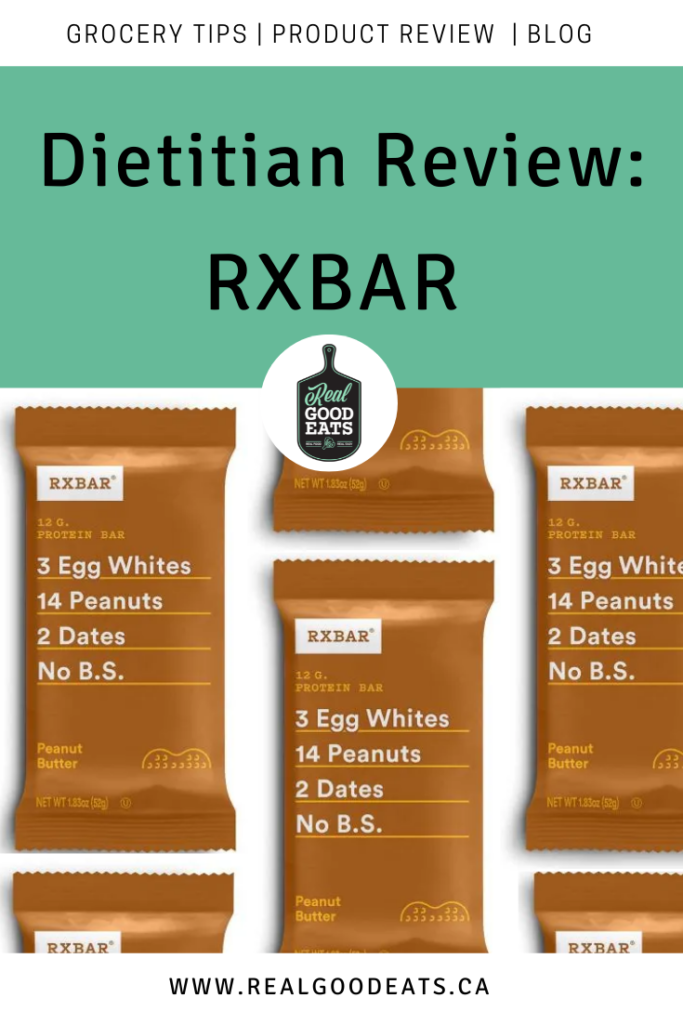 RXBAR is an egg-white protein bar. RXBAR describes their bars as using “real ingredients” you might find in your kitchen or pantry. They claim to source their ingredients responsibly, with most ingredients coming from the United States.

RXBAR is available in seven flavours: For the purpose of this review, we sampled the peanut butter flavour. The main textural properties are from dates and peanut butter, two main ingredients. We would describe the texture of these bars as chewy and gummy. The bars are oily to touch due to the peanut butter in them. There are chopped peanuts throughout the bar that add a nice crunch. The egg whites are not evident in this bar and blend in well. The flavour of this bar was pleasant and not overly sweet. 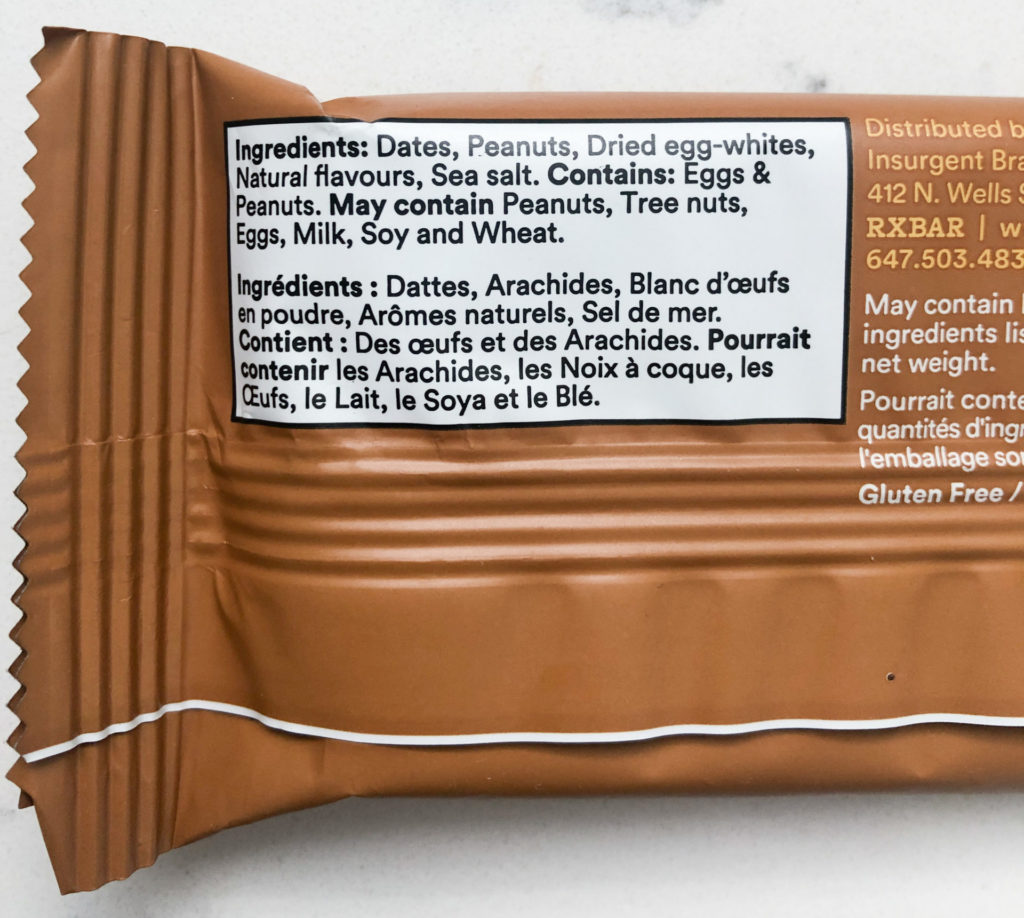 The ingredients in RXBAR are simple, and each flavour only has a handful of ingredients. The peanut butter flavour contains egg whites, peanuts, dates, natural flavours, and sea salt. We consider these bars to be high quality because the ingredients haven’t been ultra-processed like some other protein bars on the market.

Unsure what natural flavours are? Check out our recent post here for everything you need to know: What are Natural Flavours and Should You Avoid Them?

RXBARs contain eggs, peanuts, and tree nuts (depending on the flavour). 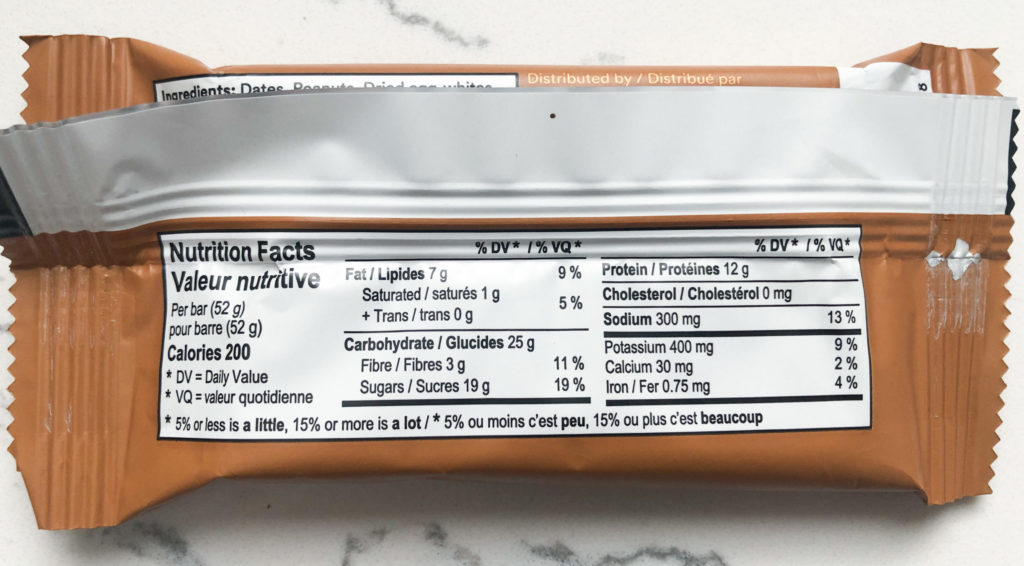 Calories: this bar has 200 calories (200-220 calories depending on the flavour). This amount is average compared to other protein bars on the market.

Fat: there is 7g of fat per bar coming from peanuts.

Fibre: this bar is a good source of fibre, with 3g per bar (3-5 depending on the flavour) coming from dates.

Sugar: there is 19g of sugar in the peanut butter RXBAR (15-19g depending on the flavour). This is a high amount of sugar, though it’s important to note that RXBAR contains no added sugar. The sugar content in RXBAR is from dates. This amount of sugar is equivalent to 3-4 whole dates, an appropriate portion size of dates to enjoy as a snack.

Protein: each bar has 12g of protein coming from egg whites. Egg whites are considered a complete protein and a high-quality protein source.

Other nutrients: RXBAR is a source of iron, B vitamins, and magnesium.

RXBAR in Ontario can be purchased for $2.99 per bar. This is moderate compared to other protein bars on the market.

RXBAR is a healthy on-the-go snack. They contain a good balance of carbs, protein, and fat for a snack and good quality ingredients. RXBAR contains a high amount of sugar, though it comes from dates, not an added sugar source. RXBARs contain the same sugar as 3-4 dates, an appropriate serving size for a snack. 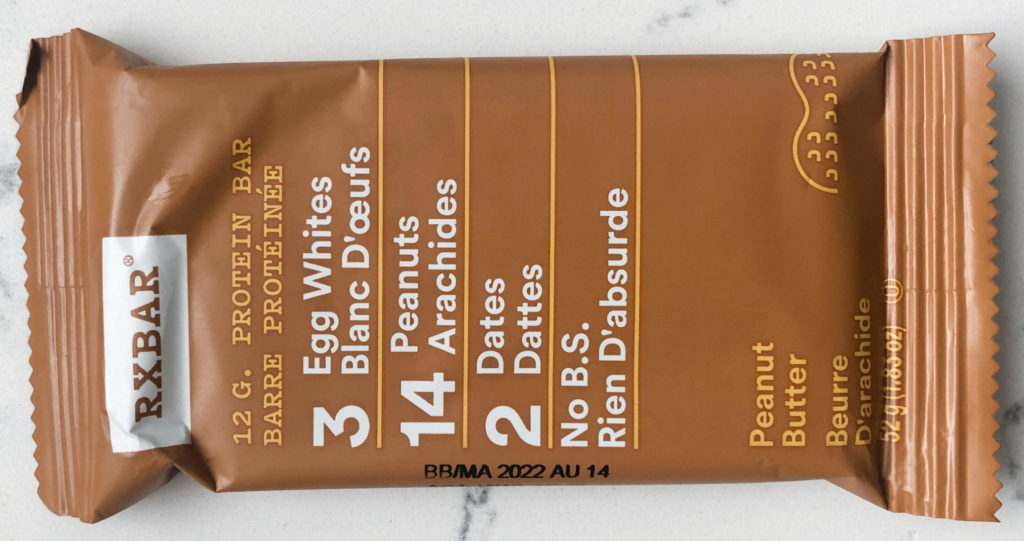 Are RXBARs good for you?

RXBAR is an excellent choice for a healthy snack on the go. It has a good balance of fat, protein, and carbohydrate to keep you sustained, and good quality ingredients.

ARE RXBARs a good pre-workout snack?

The best pre-workout meal or snack will depend on the individual’s digestive tolerance, nutritional needs, and daily nutrient distribution. Generally speaking, the carbohydrate: protein ratio in RXBARs is suitable for pre-workout.

The protein, fat, and fibre content of RXBAR may increase the risk of adverse gastrointestinal symptoms if consumed too close to a workout. However, most individuals will tolerate an RXBAR ~2 hours pre-workout.

Are RXBARs a good post-workout snack?

RXBARs are a source of carbohydrates and protein and may be suitable as a post-workout snack for those struggling to meet their needs from whole food. The amount of carbs and protein is sufficient for most recreational athletes post-workout as long as they get enough protein elsewhere throughout the day. Elite athletes or those with higher nutritional needs may require more carbohydrate and/or protein post-workout than RXBARs provide.

Do RXBARs help you gain weight?

No single food will cause weight gain alone. RXBARs can contribute to weight gain if the overall calorie intake is higher than the individual’s needs. It is easier to consume excess calories from energy-dense foods such as protein bars, as they are generally denser and less filling than whole foods.

Do RXBARs help you lose weight?

No single food will cause you to lose weight, however, RXBAR is a balanced option for those struggling with eating properly on the go. RXBAR can certainly be consumed as part of a healthy and balanced diet, however, we always suggest consuming most of your calories from whole foods first before relying on packaged items.

RXBAR contains carbohydrates and is not keto-friendly.

RXBAR contains egg whites as a protein source and is not vegan.

As a packaged food product, RXBARs have gone through processing in their development. However, the ingredients used in RXBAR are less processed compared to some other bars on the market.

RXBAR is not low FODMAP as dates are a source of FODMAPS. 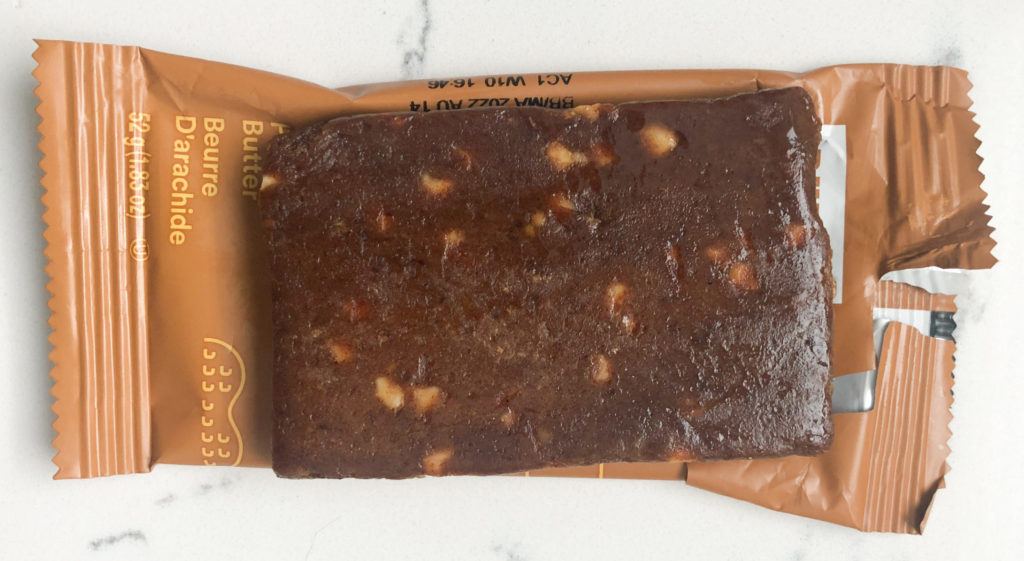 Is it OK to eat RXBARs every day?

An RXBAR can certainly be consumed daily as part of a healthy, balanced diet, however, we always suggest trying to get your daily meals and snacks from whole foods first.

How many RXBARs can you eat in a day?

For the purpose of getting enough variety in your diet and adequate nutrients, we suggest limiting your intake of RXBAR to no more than one per day.

Are RXBARs a healthy breakfast?

RXBAR provides a balance of healthy fats, carbs, and protein. As such, it can be a suitable option for a breakfast or snack on the go. RXBARs contain ~200 calories per bar and may not be adequate for those accustomed to having a larger breakfast.

RXBARs do not contain any gluten in their ingredients, however, wheat is included in the ‘may contain’ statement. RXBARs are made in a facility that also processes gluten so they may not be safe for those with allergies.

RXBARs do not contain any dairy in their ingredients, however, dairy is included in the ‘may contain’ statement. RXBARs are made in a facility that also processes dairy so they may not be safe for those with allergies.

Welcome! We’re on a mission to make healthy eating easier from the grocery store to your dinner table.

Be sure to follow here for the latest tips & recipes👇!!!